1984 Ford Mustang SVO. For most Ford Mustang enthusiasts, performance had always been defined by V-8 engines, following the credo that, “there’s no replacement for displacement.” While bigger engines can be better for drag racing, smaller and lighter ones can pay dividends on road courses, where handling and braking are every bit as important as acceleration. At the start of the 1980s, a small group of engineers and designers, led by Michael Kranefuss, endeavored to turn the Mustang into a world-class sports car. The end product, the Mustang SVO, may not have achieved its lofty goals, but it did serve as an example of what’s achievable when an automaker is allowed to break from convention.To understand the “how” of the Mustang SVO, it’s first necessary to understand a bit of the “why.” After its inglorious exit from racing in November of 1970, Ford waited a decade before deciding it wanted back into the world of “win on Sunday, sell on Monday.” Quietly, the automaker created a group called “Special Vehicle Operations,” or SVO for short, which was tasked with returning the automaker to international competition. By 1982, Ford was once again funding efforts (and gaining notoriety) in a variety of motorsports, but soon realized that the expenses of racing couldn’t be covered by the profit made from production cars. As Randy Leffingwell explains in his book, Mustang—Forty Years, Kranefuss was tasked with developing a series of high performance, specialty vehicles, from which profits would be diverted to cover racing operations. On paper, it sounded like a great idea, and the SVO team set to work on creating an all-new Mustang model.

The Mustang SVO turbocharger used an intercooler, to promote a denser charge and more power. The 2.3-liter in the 1984 was rated at 175 hp; the ’85 engine was rated at 205 hp while the ’86 was rated at 200 hp. As SVO had extensive experience with turbocharged and intercooled variants of Ford’s 2.3-liter four-cylinder engine, this was chosen over the existing 5.0- liter V-8 used in the Mustang GT. The group’s rationale for this was simple: Even in de-tuned production form, the turbocharged and intercooled 2.3-liter four could produce horsepower comparable to the larger V-8, while tipping the scales at roughly 150 pounds less. Less weight beneath the hood also translated to better weight distribution, long considered of critical importance in sports car design. Mated to a reworked Borg-Warner T5 transmission, the lightweight-but-powerful engine promised to deliver a solid foundation for a sporting Mustang. It also had the distinction of being Ford’s first engine with multi-port fuel injection, as well as the first intercooled engine fitted to a U.S. production car.Funding an independent rear suspension was beyond the group’s means, so a great deal of effort was expended on improving the handling of the live axle pony car. The resulting quad-shock design featured a pair of Koni shocks in a conventional (that is, near-vertical) orientation, with a second pair linking the top of the rear axle to the car’s subframe, virtually eliminating wheel hop under heavy acceleration. Handling was further enhanced with the addition of a rear anti-roll bar measuring 0.67 inches in diameter.

Tire ad wisdom tells us that power is meaningless without control, and SVO engineers realized that the final product would require both dedicated high-performance tires and four-wheel disc brakes. Though Goodyear had just developed its radical new Eagle “Gatorback” performance radial, first-year production was to be exclusive to the new fourth-generation Chevrolet Corvette. As a compromise, Ford opted to use Eagle NCT tires on first-year Mustang SVO models, with the understanding that Goodyear would supply a dedicated “Gatorback” radial (unique to the SVO) for its second model year. Getting four-wheel disc brakes proved to be more of a challenge, and the group was forced to tap the Lincoln parts bin for the setup from the 1982-’87 Continental.Outside, the Mustang SVO’s most distinctive styling elements were its aerodynamic nose and its then-radical biplane rear spoiler. The front design was originally crafted for flush-mounted headlamps, but these were not approved by the U.S. Department of Transportation in time for the car’s launch; a hasty redesign was christened, and the resulting front fascia was designed for use with both sealed beam headlamps and those using fixed housings with replaceable bulbs. Keeping the two-tier rear spoiler proved to be more of a challenge, as many within Ford’s corporate offices viewed the design as the modern equivalent of the Edsel’s grille. While few would object to the design if the Mustang were a success, the belief was that everyone would remember the spoiler if the car turned out to be a failure.

The SVO’s speedometer was an 85-mph unit, but unnumbered red lines led drivers of this Euro-inspired ‘Stang up to 140 mph. The tachometer likewise soared to 8,000 rpm. Charcoal gray was mandatory as was an excellent set of Lear-Siegler bucket seats. Hurst designed the linkage that stirred the T-5 five-speed.
Inside, the SVO group did what it could to make the Mustang seem upscale and more desirable. The standard Mustang seats (which offered little in the way of lateral support) were dropped in favor of deeply bolstered chairs sourced from Lear-Sigler. While the initial plan called for seats from Recaro, these proved far too expensive in the low production volumes (less than 10,000 units per year) that SVO was targeting. Another unique interior feature of Mustang SVO models was a boost limit switch; recognizing that customers may not always be able to tank up with premium (higher octane) gasoline, the SVO engineers gave drivers the ability to select a lower boost setting as conditions warranted. Fueled with 91 octane gasoline, and with the rocker switch in the “Premium” position, the Mustang SVO would allow 10 psi of boost to 2,500 rpm, then 14 psi of boost above this engine speed. If just regular gasoline were available, knock sensors would retard ignition timing and limit boost to a maximum of 10 psi (with the switch set in the “Unleaded” position).

Early in the car’s design phase, plans called for the launch of the Mustang SVO in mid-year 1982, but Ford dropped a (temporary) bombshell when it announced the Mustang would be phased out, replaced by a front-wheel drive sports car built on partner Mazda’s Mazda 6 platform. Though this decision proved short-lived, it delayed the launch of the Mustang SVO until the fall of 1983, as a 1984 model. As the car’s introduction approached, the SVO team realized that launching such a specialized vehicle alongside Ford’s other models would only ensure that it was lost in the ensuing confusion. Instead, plans were made to introduce the Mustang SVO in April of 1984, as a 1984½ model.

The Mustang SVO hit the market priced at $16,713, some $6,018 more than a base Mustang GT with the 5.0-liter V-8. Performance of the SVO was spirited, with the car capable of running from 0-60 mph in 7.5 seconds, completing the quarter-mile in 15.5 seconds at 90 mph. Critics were quick to point out that the V-8-equipped Mustang GT could run from 0-60 mph in 6.4 seconds, completing the quarter-mile in 14.9 seconds, but that missed the point of the car entirely. Unfortunately, few buyers seemed to understand that the Mustang SVO was designed more for road courses (and canyon roads) than drag strips, and dealers sold just 4,508 examples.For 1985, the Mustang SVO received several key changes, including flush headlamps that yielded better looks but virtually no improvement to the car’s coefficient of drag. The big news was likely the car’s increased horsepower (ECU tuning now yielded 205 horsepower, a gain of 30 horsepower from the initial model) and lower price, though other changes included the promised Goodyear Gatorback tires, stiffer rear shock valving, a revised rear axle ratio of 3.73:1, quicker steering, and improved fuel economy. While the Mustang GT, priced from $11,553, still represented a bigger performance bargain, the SVO now started at $14,895, meaning the pricing gap between the cars had closed to $3,342. Equally important, the Mustang SVO could now get through the quarter-mile in around 15 seconds at 94 mph, making it noticeably quicker than the previous model and dropping its quarter-mile time to nearly on par with the Mustang GT. Despite the significant improvements and lower price, Ford dealers sold a mere 1,954 examples in 1985.

The SVO’s hood scoop was functional and fed air to the intercooler. Its exclusive 16-inch wheels shod with Gatorback tires were pretty exotic at the time.
For 1986, the SVO group dialed back the car’s ECU tuning to an even 200 horsepower (to guard against poor fuel quality issues), but bumped the price back upwards to $15,646. As word spread among racers and sports car enthusiasts, sales of the SVO began to slowly creep upward, and by year end Ford had delivered 3,382 examples to new owners. SVO would prove unable to capitalize on this, as Ford notified its performance division that the Mustang would (once again) be cancelled at the end of the 1986 model year. The promise that the Mustang SVO would beat the BMW 3-Series at its own (well established) game would go unfulfilled.History tells us that Ford didn’t cancel the Mustang after the 1986 model year, largely due to the UAW pointing out to Ford’s management the potential drawbacks to displacing so many of its members.

Dual-wing polycarbonite rear spoiler was an SVO-only feature and was said to provide downforce.
As to why the Mustang SVO was not more successful in the marketplace, the reasons are, at best, complex and layered. Convinced the car would “sell itself,” once word spread of its performance capabilities, neither SVO nor Ford made much of an effort to market the car or to train dealers in selling the unique Mustang. Worse, many salespeople steered customers in the direction of the less expensive (but far more familiar) Mustang GT, leaving the SVO to play the role of the overbred redheaded step child. While probably not a major factor in the car’s disappointing sales, the SVO racing effort that was to have featured the car floundered, leaving Ford in the unenviable position of “lose on Sunday, sell nothing on Monday.”Without the groundwork laid by the SVO, Ford wouldn’t have constructed the later, higher-performance Mustang SVT Cobra and Cobra R. The automaker probably wouldn’t have embraced the expense behind creating cars like the 2012-’13 Boss 302, either. Obviously the SVO is the grandfather of today’s 300-plus-horsepower, 2.3-liter EcoBoost four-cylinder powered Mustangs, which have attracted a new generation of Mustang buyers to Ford showrooms. Hindsight is 20/20, of course, but viewed in a contemporary light, the Mustang SVO certainly wasn’t the failure that many once considered it to be.

This wonderful example of the first year of production SVO is showing just over 34,000 miles. The car is finished in Silver Metallic over gray cloth and is powered by a turbocharged 2.3-liter inline-4 paired with a 5-speed manual transmission. The car was serviced within the last 500 miles. This Mustang SVO is offered with a Deluxe Marti Report that includes a copy of the Window Sticker and a clean CARFAX report. The exterior is finished in Silver Metallic (1E) and features a factory hood scoop, a black two-level spoiler affixed to the rear hatch and an optional pop-up sunroof. Factory 16 wheels are mounted with Bridgestone tires. This Mustang SVO was fitted with KONI adjustable shocks and struts from the factory, along with 4-wheel disc brakes. The interior is trimmed in gray with matching door panels and dashboard. Factory equipment includes an AM/FM/cassette stereo, power accessories and air conditioning, as well as SVO-specific items such as a three-spoke steering wheel, a Hurst shifter, dash badging. It also has a premium fuel switch nicknamed the “Turbo Switch,” which, when flipped to Premium Fuel, increases the turbo boost by 3 to 4 pounds. The five-digit odometer shows just over 34,000 actual miles. The turbocharged and intercooled 2.3-liter inline-4 was factory-rated at 175hp and 210 ft/lbs of torque. Power is delivered to the rear wheels via a 5-speed manual transmission and Traction-Lok rear axle with 3.45:1 gears. The Window Sticker shows an original list price of $17,709, including the optional flip-up sunroof and air conditioning. 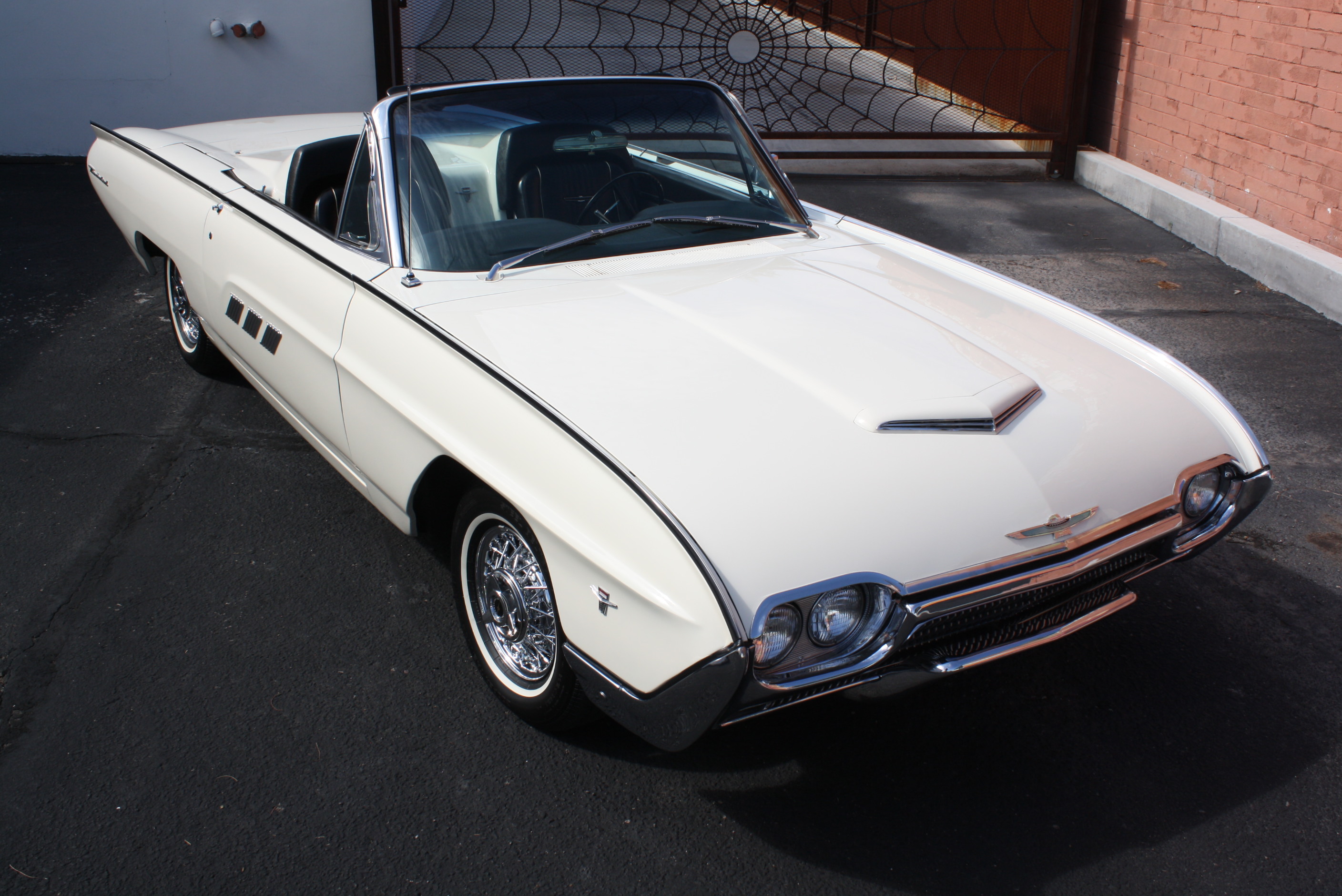 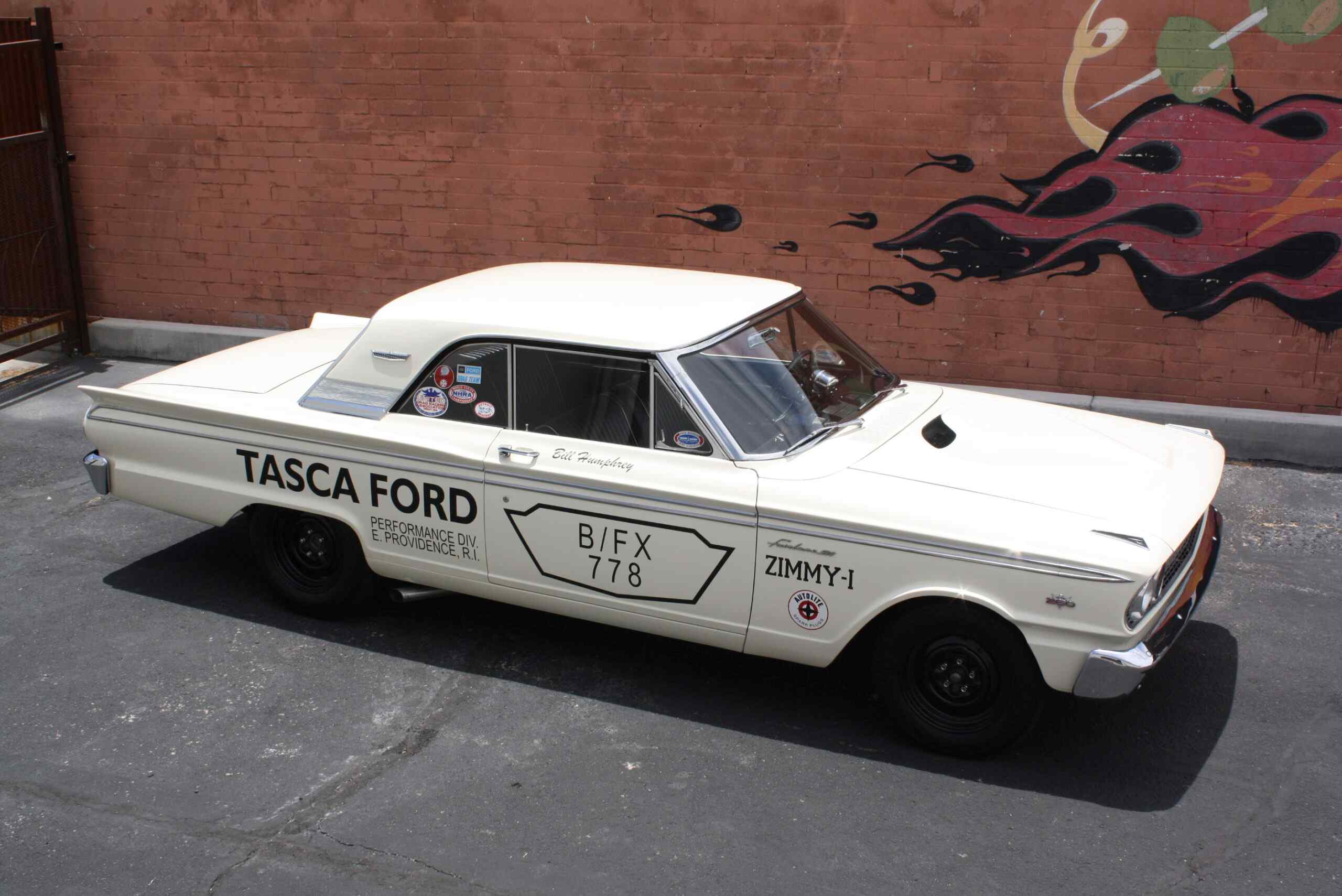